Woolston Community High School was named by the government department responsible for education as a ‘top performing school’. The award was based on the sustained improvement in results between 2006 and 2009 which places us in the Top 40 most improved schools in the country. Only 3% of schools were named as top performers this year. We are delighted by this award and the recognition it gives of the teamwork between pupils, staff, parents and governors 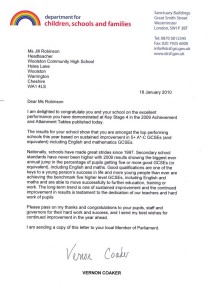